Bus routes in rural areas of Scotland have faced consistent cuts in recent years, as operators focus on revenue-generating routes in towns and cities, leaving many people without access to a vehicle of their own stranded.

Bruce has been the driving force behind the creation of The Ferintosh Community Bus, which was officially launched in February 2022, after an eight-month pilot scheme. The project is a partnership between Ferintosh Community Council (supported by the Culbokie Community Trust), HITRANS, Stagecoach, The Highland Council, CSI Ross-shire and Bannermans Transport, and has already secured funding until 2026.

Also known as the Wee Bus, the service is provided by a seven-seater electric vehicle, available as an on-demand service to those living or visiting the Ferintosh Community Council area. Residents simply need to call The Wee Bus service and book their journey, and the service will turn up to their door and take them where they need to go within the Black Isle, including an important connection with scheduled Stagecoach services which pass through the area, including the routes which run up and down the A9 and call at the nearby Tore service station.

As well as ticking an environmental box – one trip on the Ferintosh Community Bus could be replacing six separate car journeys – the project is also kind on the pockets of Ferintosh residents. Travellers are only asked to pay what they can, with a £2 flat fee suggested, but for those who are connecting with Stagecoach services at Tore the price of the Wee Bus is included in their ticket, including all concessionary fares. The Wee Bus is even wheelchair accessible and is available seven days a week. Paid drivers run the service during the day, with a fleet of volunteer drivers getting behind the wheel on evenings and weekends.

The Wee Bus is already making a difference to the lives of people living in the Ferintosh area, allowing them easier access to regular bus services and transport within the local community. But it has been a long journey to get to this point. 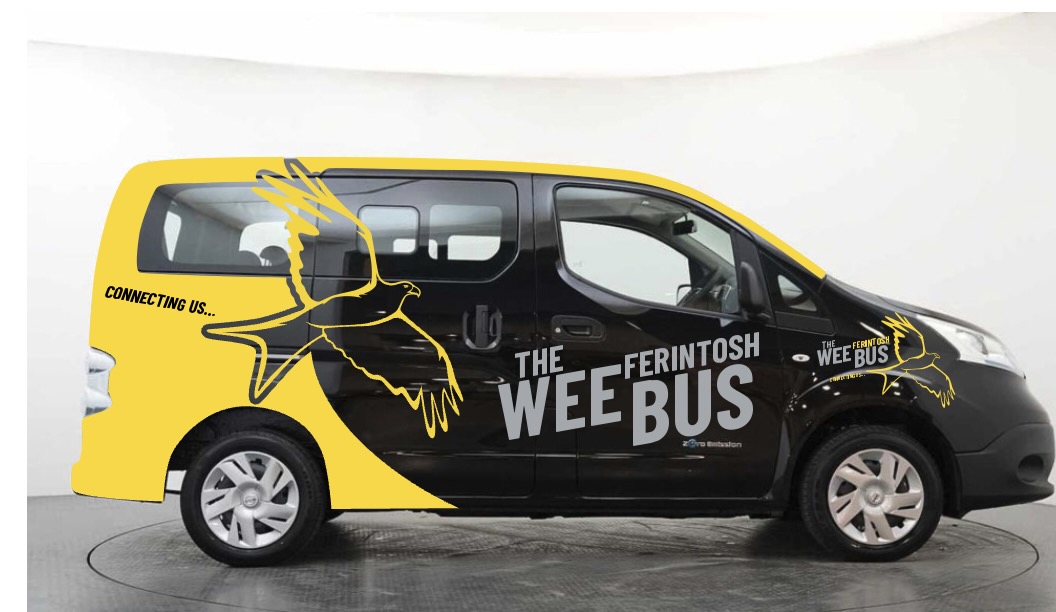 Bruce Morrison identified that there was a need for better transport links in the Ferintosh area and came up with the idea of a Community Bus Link, which gave people lifts from their homes to nearby bus stops. However, there were problems with this model.

“Often the bus stops that we were taking people to were unsuitable for long waits, with passengers expected to wait by the side of busy roads at stops which didn’t even have a shelter. While the principle was sound, the initiative itself failed and we realised that we needed to find another way of tackling the transport deprivation in our area.”

“Community support was an essential part of getting Stagecoach and HITRANS on board, and early consultations by Ferintosh Community Council showed that there was a real demand for improved public transport in the area. Now that the service is up and running, the community council’s role is more about promoting The Wee Bus to the local community to ensure that it is well-used, and to make sure we are reaching those who would benefit most from access to the service.”

The bus is financed by Highland Council, who bought the vehicle and pay for its running costs. But the Ferintosh Community Bus is actually a money saver for the council, as they would previously have paid Stagecoach a subsidy to provide under-used services in the area. It is a model that could easily be replicated in other rural areas, where there is a need for a more demand-led public transport system.

“Our launch event in February was attended by Kate Forbes MSP, and generated quite a lot of press and social media coverage. Within a few days, I had received communications from people across Scotland who wanted to find out how we got the Ferintosh Community Bus on the road.

“There is clearly a need for reliable public transport options in rural communities. The Wee Bus model could be the answer for communities who are experiencing similar levels of transport deprivation.”